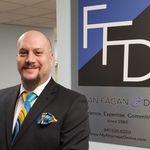 Avi Fagan graduated from the University of Illinois at Chicago with a degree in Criminology, Law, and Justice. He earned his law degree from Northern Illinois University in DeKalb, Illinois and received a 711 license from the Illinois Supreme Court permitting him to practice as a Senior Law Student. This license enabled him to represent economically disadvantaged clients before the court for the Zeke Giorgi Criminal Defense Clinic in Rockford, Illinois, and later to prosecute traffic and misdemeanor offenses for the Village of Arlington Heights, Illinois.

Avi stepped away from full-time undergraduate studies to pursue his love of music, playing bass guitar professionally in two long-running bands over a decade and a half. As musicians often do, he supplemented his creative endeavors with work as a legal clerk, warehouse manager, restaurant host, special needs teaching assistant, and working in sales. As a musician, Avi performed at venues and festivals in Chicagoland and throughout the Midwest, including audiences of over 12,000. Avi not only performed, but wrote music and lyrics, promoted and organized events, designed graphics and flyers, and recorded and produced music in professional studios that were also used by The Smashing Pumpkins, The McDonald's Corporation, and the hit TV show Empire. Avi performed openers for major artists including Primus, The Wailers, Cake, Bad Religion, Rusted Root, Cypress Hill and more before finding his passion for trial law.

One of the most profound influences on Avi's life and outlook was his time teaching children with special needs. His students were living proof that people can change and improve with hard work, and after encouraging them to expand their horizons and take their education as far as they could, he realized that he had to apply that attitude to his own life. Returning to his undergraduate studies in earnest, Avi came to realize that the field of law was where he could use his skills and experiences to make the biggest impact on other people's lives.

We strongly recommend inclusion of an email address.

Thank you for contacting us. We will get back to you shortly.

Please complete all required fields below.

If you are facing a Traffic Offense, DUI or criminal office in the Greater Chicago area, including Cook, Lake and DuPage Counties, we will review your case with you at no charge and discuss what you face and how we can help.

Where do we appear in court?